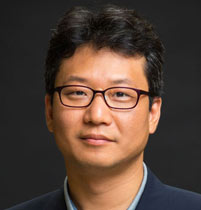 Hyun-Jun Kim’s primary research interests focus on the health and social inequities faced by disadvantaged older adults. His research examines the disparities in physical, mental and cognitive health and quality of life; the intersectionality of sexuality, gender, race, and ethnicity; and the role of social exclusion, social isolation and support networks as risk and protective factors. He aims to translate his findings into interventions designed to improve the health and well-being of historically and socially marginalized populations.

Kim has served as a project director and co-investigator on multiple landmark studies including Aging with Pride: National Health, Aging, and Sexuality/Gender Study as well as Innovations in Dementia, Empowerment and Action (IDEA), both funded by National Institutes of Health and National Institute on Aging. He served as a multiple principal investigator on Care Network-IDEA, pilot-testing an intervention to improve the quality of life for LGBTQ older adults experiencing memory loss without a caregiver. Currently, he is researching variations in social isolation and social and kin relations among older adults by sexuality, gender, and race and ethnicity and how they are associated with cognitive health. He plans to investigate the interplay of social exclusion, stress and other health-promoting and adverse factors.

Kim is the director of the Health, Sexuality & Gender Research Center at the School of Social Work’s Goldsen Institute. He is a Fellow of the Gerontological Society of America, where he has received recognition for his contributions on aging and health research. He received his BA in social work from Yonsei University in Seoul, Korea; MSW from Arizona State University; and PhD from University of Washington’s School of Social Work.