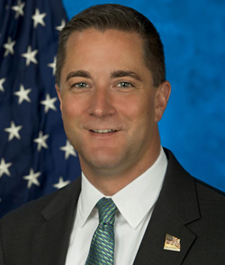 Michael Kilmer (MSW ’04) is the first recipient of the inaugural School of Social Work Early Career Achievement Award. This new award recognizes alumni who, within 12 years of receiving their last degree from the School of Social Work, are carrying out innovative work, demonstrating influence in their field, and making a notable impact on the social work profession.

After serving approximately 15 honorable years in the U.S. Coast Guard, Kilmer was forced out in 2002 as part of the anti-gay “Don’t Ask/Don’t Tell” military policy. He became actively involved in the movement to repeal and replace policy, which was accomplished in 2011. In recognition of his efforts, Kilmer was invited to attend and witness the presidential signing ceremony marking the end of the policy.

In 2004, he returned to graduate school at the University of Washington where he received an MSW. Afterwards, he developed a nationally recognized care management program for returning post-9/11 combat veterans with the VA San Diego Healthcare System. In 2008, he began work as a program director with the VA Desert Pacific Healthcare Network in Long Beach, Calif., where he oversaw multi-disciplinary care management teams across five healthcare systems. He also supervised Masters of Social Work and Masters of Public Health graduate interns and other Leadership Development Institute projects.

Kilmer also served as acting assistant director at the San Diego Healthcare System, and taught in the social work program at the University of Southern California.

During the past 10 years, Kilmer has received numerous honors and awards, and is a member of the American College of Health Care Executives, the Case Management Society of America,and the National Association of Social Workers.