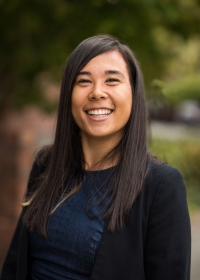 Nicole Vallestero Keenan (MSW ’11) has received the UW School of Social Work’s Early Career Achievement Award for 2016. A social worker and champion of racially just, community-centered policy, Vallestero Keenan is executive director of the Fair Work Center, a hub for workers to better understand and exercise their legal rights, improve their working conditions and connect with community resources.

Vallestero Keenan has more than a decade of experience in research, advocacy, civic engagement, racial justice organizing, social services, and community and business outreach. At the Fair Work Center, she leads a staff of seven who train workers about their rights on the job and offer support when those rights are violated.

Before launching the Fair Work Center, Vallestero Keenan was policy director of Puget Sound Sage, providing research and advocacy in the labor and environmental arenas. One of the community-based research projects she led at Sage focused on understanding how communities of color and low-income residents identify the impacts of climate change.

Earlier, as an organizer with Washington Environmental Council, she played a key role in preventing a coal export facility in Grays Harbor County. The facility, if built, would have contaminated the air and water near several oyster farms and residential neighborhoods.

In 2014, at the age of 29, Vallestero Keenan served on Mayor Ed Murray’s Income Inequality Advisory Committee—the youngest person on the committee—where she was a voice for racial equity and workers’ rights. Her work had an influential impact on the passage of the historic $15/hour minimum wage in Seattle.

In 2014, she received a 50th Anniversary Civil Rights Leadership Award from the Seattle Office of Civil Rights and Seattle Women’s Commission, and the following year, she was named one of the “15 people who should really run Seattle” by Seattle Met magazine.

In addition to the leadership and dedication she brings to her work, Vallestero Keenan is a School of Social Work field education instructor who is known for her mentorship of students and other young professionals.

About the Early Career Achievement Award

The Early Career Achievement Award recognizes alumni who, within 12 years of receiving their last degree from the School of Social Work, are carrying out innovative work, demonstrating influence in their field, and making a notable impact on the social work profession. This award, now in its third year, was given previously to Agenie McCleary (MSW ‘07) and Michael Kilmer (MSW ’04).