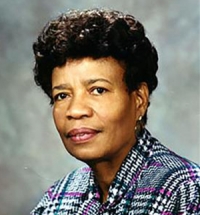 Dorothy Hollingsworth (MSW ’59), UW School of Social Work alumna and a leader in Seattle’s education and civil rights community, died July 26, 2022, at the age of 101.

Hollingsworth became the first Black woman to serve on a school board in Washington state when she was elected to the Seattle School Board in 1975. In 1979, she was made board president and went on to lead the district during the volatile years of school desegregation. From 1984-93, she served on the Washington State Board of Education.

The School of Social Work honored Hollingsworth for her exceptional service and leadership when it presented her with the Moya M. Duplica Distinguished Alumni Award in 1997.

“Dorothy is legendary in the social work community,” said Edwina S. Uehara, Professor and Ballmer Endowed Dean in Social Work. “Throughout her long and distinguished career, she was a strong and passionate advocate for children – whether as a teacher, social worker, school board official, program administrator or community activist. Her contributions to education, social justice and equity are unparalleled, and we are proud to claim this trailblazer as one of our most distinguished graduates.”

Born in Bishopville, S.C., in 1920, Hollingsworth graduated from Paine College in Augusta, Ga., in 1941 – the first in her family to attend college -- and taught school for five years. In 1946, she moved with her husband to Seattle and became an investigator for the Department of Welfare. After earning an MSW at the UW School of Social Work in 1959, she took a position with the Seattle School District as a social worker, where she ceaselessly advocated for students and families in the Central District.

In 1965, Hollingsworth became the first director of Seattle’s Head Start program. This federal program, aimed at improving the futures of children from low-income families, had just been launched and Hollingsworth was responsible for organizing and establishing the Seattle program. The following year, she was asked to bring her extensive expertise to the national advisory board for the popular children’s TV show, “Sesame Street.”

For three years beginning in 1969, Hollingsworth was deputy director for planning at the Model Cities Program, a federal initiative that sought to make sweeping changes to urban planning and provided resources to combat social and economic decline in communities of color. Later, federal officials praised the Seattle program as one of the best in the nation. Hollingsworth also served the City of Seattle as director of Family, Women and Children’s Services, and deputy director of the Department of Human Resources.

For her many contributions to education, leadership and community engagement, along with her ongoing work to break down racial barriers, Hollingsworth also received the Matrix Table Award (1976); Edwin T. Pratt Award (1986); Nordstrom’s Cultural Diversity Award (1992) and the Isabel Colman Pierce Award (1994). In 2010, she was one of 100 women honored by the UW Women’s Center on the 100th

anniversary of female suffrage. She was a proud member of Delta Sigma Theta Sorority, First African Methodist Episcopal Church, and the NAACP.

Hollingsworth is survived by two children, Jacqueline and Raft, and four grandchildren. The family will host a celebration of life on Thurs., Aug. 25, at Seattle’s First AME Church